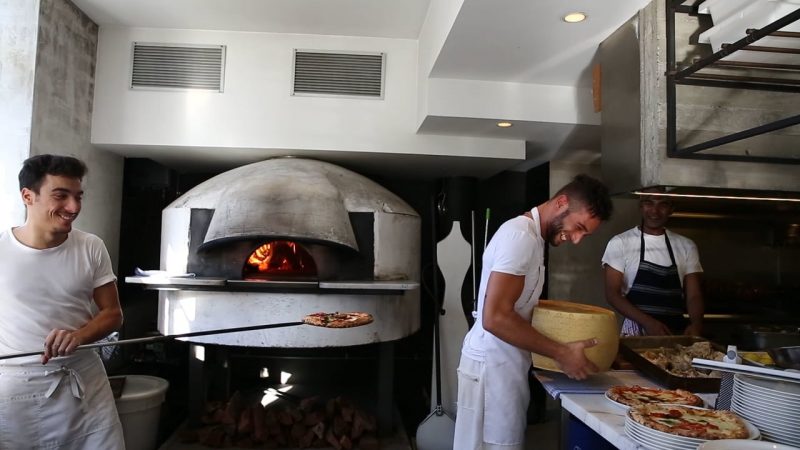 Former Melbournian, provocateur, and fashion designer, Maurice Terzini, owner of Da Orazio Pizza + Porchetta, has a crystal clear notion about what the establishment ought and ought not to be. Maurice Terzini does not want Da Orazio Pizza + Porchetta to be a restaurant that is only reputed for its pizza. Instead, he wants it to be a pizzeria that also offers a selection of other dishes. Recently, Australia has witnessed a mushrooming of various pizzerias that offer additional meals alongside their pizza. Some of these pizzerias have gone on to be tremendously successful restaurants. Supermaxi, Ladro, and Mr. Wolf are some of the examples in recent history. Roseberry’s Mario’s is another excellent example of this trend. However, Maurice Terzini isn’t all about copying what others are doing. As a fashion-forward person who is credited with inventing the Campari bottle’s row, as an ornamental motif, Maurice Terzini has the rare gift of turning everything he touches into gold. His creations are so compelling that they continue to thrive long after he comes up with them. So, when the man with the Midas touch got into the pizzeria business, success was likely to follow.

The first thing you notice when you visit Da Orazio Pizza + Porchetta is how packed the establishment is. Every day there is a line out the door eagerly waiting to try out some of Maurice Terzini’s good stuff. Unlike the fallen Neild and North Bondi Italian food, Da Orazio Pizza + Porchetta takes reservations. However, the reservations are limited to 5 pm to 7:30 pm, after which it becomes a free-for-all affair. Maurice Terzini and longtime partner and manager Rachel Duffy brought back the art of the squeeze and the juggle, which was conspicuously absent at the Melbourne restaurant scene. Similar to how Hitchcock preferred beginning with challenges and working in an anti-clockwise manner to find the solutions, Maurice Terzini seems to be interested in establishing restaurants that feature small tables where you can order meals that cannot perhaps fit, and require variations of spatial relation laws by the waiters.

Another thing that you might notice is that the restaurant is called Da Orazio Pizza + Porchetta, and not Da Mozza, Da Maurizio, or Da Maurice (although Da Mozza sounds a little bit Bondi-like). After discontinuing his collaboration with Robert Marchetti in 2013, Maurice Terzini enlisted Chef Orazio d’Elia, who previously worked at Rushcutters Bay’s Popolo. Chef Orazio d’Elia worked for Maurice Terzini at Icebergs. The ubiquitous Paul Wilson has since joined Icebergs as a consultant, and Monty Koludrovic has brought to the kitchen the reins. Chef Orazio d’Elia now applies his culinary prowess and reputation to Da Orazio Pizza + Porchetta, which so far seems to be a mutually favorable arrangement.